It has been a record-breaking year for recreational cricket - with 10,000 more adult fixtures being played in club cricket compared to the last full season, and over 101,000 children taking part in ECB-run National Programmes this year, with the introduction of Dynamos Cricket fuelling the boom.

The All Stars (5- to 8- year-olds) and Dynamos (8- to 11- year-olds) National Programmes offer kids a chance to get active and learn the fundamentals of cricket across a series of fun and social sessions, run by local cricket clubs, schools, community centres, leisure centres and faith institutions across the country. 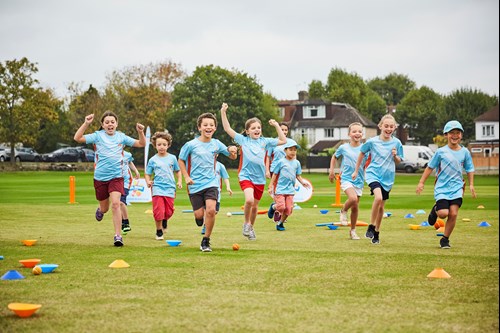 The launch of Dynamos means that for the first time there is a dedicated and fun programme for 8- to 11- year-olds encouraging them to take up – or stay involved – in the game. It links directly with The Hundred, which aims to inspire more children to take up the sport, introducing children to countdown cricket and offering money-can’t-buy experiences such as taking part in a session on Lord’s Nursery Ground this year.

As well as the record number of children taking part in these programmes, this year’s playing boom – after a year of disruption in 2020 due to COVID-19 – has seen:

The ECB is committed to opening cricket’s doors to all those that want to play the sport, regardless of their gender, ethnicity, background or ability and this summer’s All Stars and Dynamos programmes have seen 27,000 girls, 13,000 children from ethnically diverse backgrounds, and over 3,000 disabled children pick up a bat and ball.

In addition, the ECB has also partnered with Sky to launch Dynamos cricket Intros this year. With the ambition of reaching children who might not ordinarily have access to cricket for a variety of reasons, the three-year investment will train hundreds of inspiring new diverse coaches and enable schools and community centres in underprivileged areas to provide courses for free. This partnership has helped over 10,000 kids have free access to Dynamos cricket in 2021 and has seen stars like Jofra Archer and Sarah Taylor encourage even more kids to take up Dynamos Cricket Intros through online video content. The number of children taking part in All Stars and Dynamos from the 20% most deprived areas of the country has doubled this year.

To reach more people than ever before, particularly those living in urban areas, 160 hubs have been developed in cities across the country, which have worked with over 20,000 young people this summer, and 10,000 more children have attended cricketing school breakfast clubs set up by the ECB.

There are also now over 100 Disability Champion Clubs across the country who create time and space for members of their community with different needs to enjoy the game of cricket.

Record-breaking participation would not be possible without record-breaking numbers of volunteers and coaches who give their time and commitment to teach the next generation. In partnership with Sport England, the ECB has now trained 1,000 South Asian women to deliver All Stars and Dynamos Cricket as part of the South Asian Action Plan. Funding has also been provided for 2,750 people from ethnically diverse backgrounds to become accredited cricket coaches, alongside 100 scholarships which will provide opportunities for these coaches to progress through the game, driving diversity and strong role models at elite levels.

Tom Harrison, ECB Chief Executive Officer, said: “It is inspiring to see so many young people playing cricket this year. At all ages, record numbers have taken to the field, with more players and more fixtures than ever before. This provides cricket in England and Wales with a strong platform to build from in future so that we can encourage even more people to pick up a bat and ball.

“Thank you to all the players, clubs, coaches and volunteers who give up their time to make cricket what it is. We want to encourage even more people to follow in the footsteps of those who have fallen in love with the sport this summer.”