Dynamos Cricket coming to Lancashire in 2020

Although the 2019 cricket season is over, planning for the 2020 season is already underway and details of the ECB's exciting new programme for 8 to 11 year-olds, Dynamos Cricket can now be revealed.

The 2019 season saw over 3,600 5 to 8 year-olds participate in the ECB All Stars Cricket programme at over 125 centres across Lancashire. The plans are for 2020 to be even bigger, with England's ICC Cricket World Cup 2019 win legacy, it’s going to be another massive summer of cricket and a further opportunity to inspire the next generation of cricketers.

Dynamos Cricket, which was launched in Lancashire at an ECB Roadshow in Wigan last month, is an eight week course that will run during Summer 2020. either alongside an All Stars programme or existing Junior Cricket offers, beginning in May or during the summer holidays - alongside the start of The Hundred competition. which Dynamos will be linked to.

The programme, aimed at bridging the gap from All Stars to Junior Club Cricket, will feature eight weeks of countdown cricket with each participant receiving a Dynamos Cricket t-shirt, access to an online app and the potential for money can't buy experiences with The Hundred.

Clubs delivering the programme will receive a kit bag equipped with stumps, bats, balls, cones, activator t-shirts and more - everything required to run a fantastic summer of Dynamos Cricket!

If you would like to receive further information on Dynamos Cricket, please do not hesitate to contact: 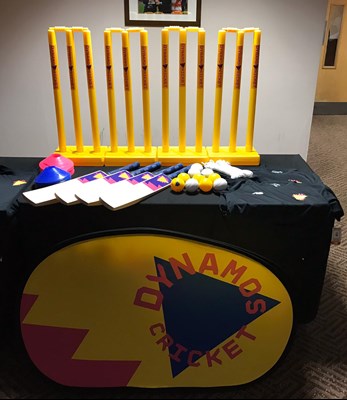