The L&DCC W&G Finals Day 2020, carried over from last September, was finally able to be played at Northern CC in May. Whilst it was a long wait for the 5 competing teams, it all seemed worthwhile as a highly exciting day's cricket provided the perfect prelude to the expanded 2021 season.

The truncated 2020 season determined that competitions be run as tournaments rather than leagues, and final business was concluded for the Women's Softball Tournament and the Women's Hardball Super 8's Tournament.

First up were the 2 semi finals for the Softball Tournament. Old Xavs batting first against Liverpool posted 241. After 5 overs of their allotted 8, Liverpool had much to do on 207. Two boundaries in the 6th over gave them hope. The final pair were required to score 18 from the final over for a place in the final, but were dramatically 1 run short of forcing a SUPER OVER, with Ellie Fielding playing some excellent shots in her 26 off 11 balls (5 fours). In the second semi, Wavertree inserted Firwood Bootle Belles A and would have been fairly happy to confine them to 233. Their innings started solidly, but 3 wickets in 3 balls across the 3rd and 4th over was a blow they never recovered from (206), meaning the Belles joined Old Xavs in the final.

The Belles elected to field maintaining pressure throughout the Old Xavs innings which, in keeping with the games so far, produced a moderate score of 235. An accomplished batting display, however, saw Firwood Bootle lift the trophy with a winning margin of 34 and no wickets down. Winning all 8 of their qualifying games meant they had taken the title with a 100% record and 10 straight wins. Old Xavs were worthy runners up, winning 8 of their 10 games.

In the 3rd place play off, Wavertree defeated Liverpool by 17 runs. 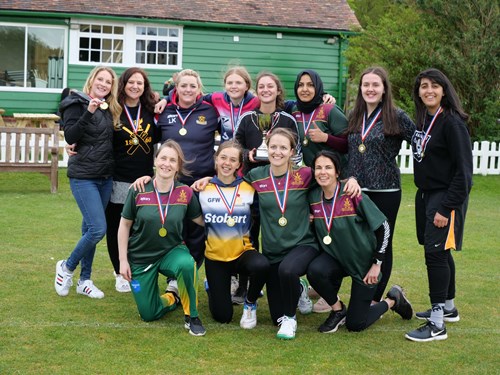 Hardball then took centre stage on the County wicket with the final of the Women's Hardball Super 8's Tournament, where Firwood Bootle Belles met the Group Team, a composite of players from Northern, Old Xaverians and Sefton Park, brought together to maximise play opportunities for players at clubs unable to enter a hardball team in their own right.

Winning the toss and electing to bat, the Group team made a healthy start with the opening pair putting on 28. The middle overs saw Firwood exert pressure to limit the scoring, as well as capturing 2 wickets. When the last pair came in for the final 4 overs the Group's score was 266 with the feeling that these final overs would be important in setting the tone for the remainder of the game. By the time the innings closed, a challenging target of 309 had been set with a destructive innings from captain John, who hit 33 off 16 balls including 7 boundaries.

The bowling and fielding was tight at the start of the Belles innings and a wicket in each of the 3rd and 4th overs was a setback in their quest to overhaul the challenging target. 2 boundaries from Alex Walker gave Bootle hope of getting the chase back on track but with 3 further wickets falling the innings finished on 253 to give Group a win by 55 runs and lift the trophy.

It had already been decided due to the success in trialing hardball last season, that 2021 would see a more substantial roll out of the format. Demand is such, we have 8 teams about to commence a Super 8's League programme, and July will see the roll out of the first full non-pairs cricket, with the launch of the Women's T20 League. There are also now 2 Softball Competitions including for the first time, a Super 8's format league. Paul Bate, Comp Women & Girls Cricket Officer said: "The Finals Day has been a great success and the perfect curtain raiser to our expanded programme. The excitement for this is already building as the growth and progression of female cricket in our league moves forward at a remarkable pace."